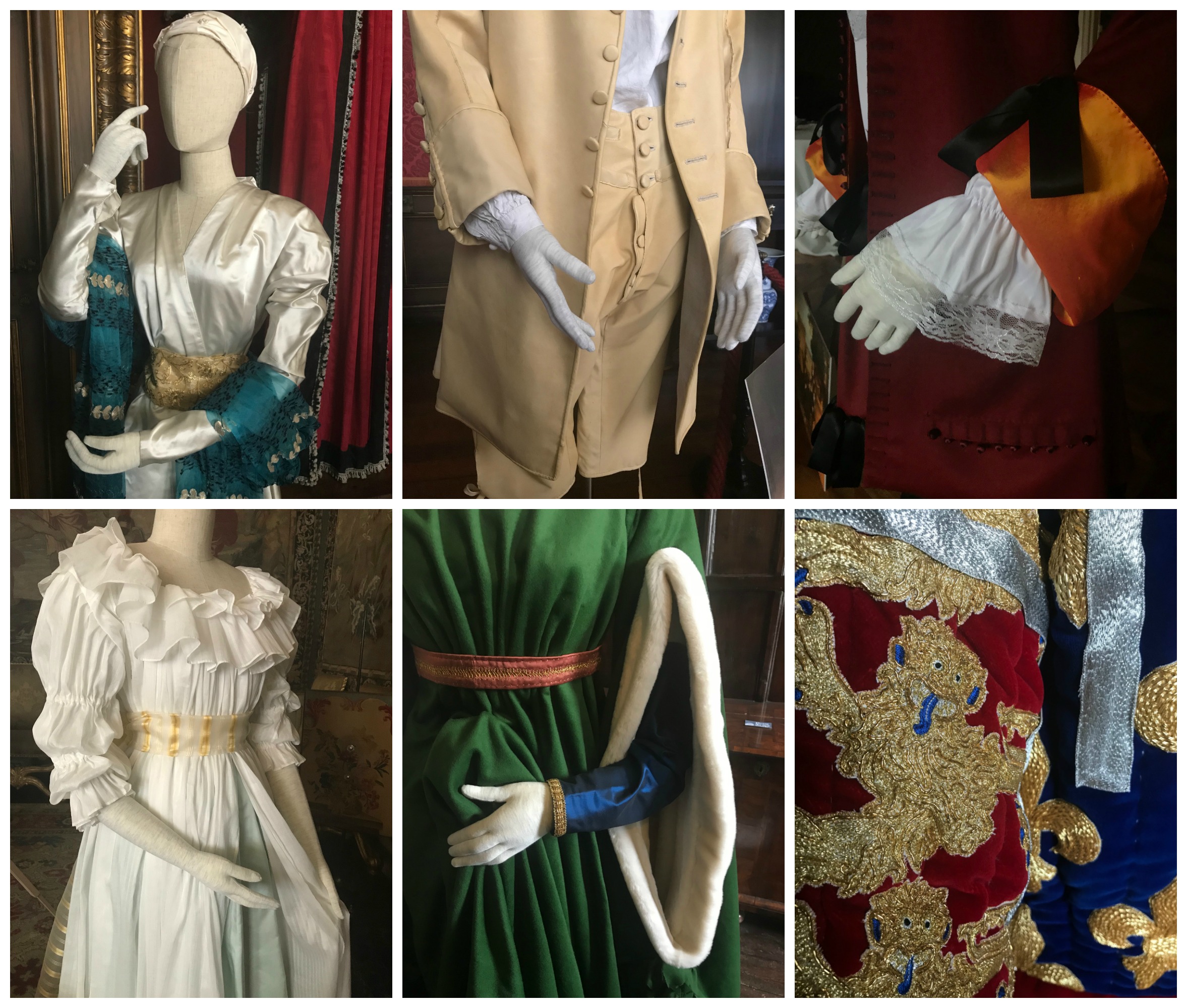 I recently watched the fabulous series A Stitch in Time on BB4. This wonderful show, is presented by fashion historian Amber Butchart. Over the course of 6 episodes, costumes from a number of paintings are carefully reconstructed by a small team lead by historical costumier Ninya Mikhaila. The series is a lovely look at fashion history which combines art history and social history. In each of the half hour episodes Amber chooses one painting and talks about its background. We then look at the materials and methods that were used to create each garment, at the end the final reconstruction is revealed and worn by Amber. I really enjoyed learning about the social context of each outfit as well as the methods used to create them.

Having really enjoyed the series I was delighted to hear that all the costumes would be going on display at one of my favourite places – Ham House. So this week I popped along for a visit with my mum and its was amazing seeing the clothes close up and really taking in all the details.

Both my mum and I really enjoyed the episode in which they recreated the dress from the Arnolfini Portrait by Jan Van Eyck, which you can actually see in my previous blog post! The dress is absolutely fascinating and has such interesting construction. I love that it is lined with fur and has so much fabric. I learnt so much from this episode of the series too.

I love that the mannequin is posed in the same position as the bride in the original painting. Her pose holding up the front of her dress is so iconic. You really get a sense of what an expensive garment this would have been and how much fabric and work went into making it.

The next piece we saw, was one that absolutely amazed me when I watched the episode on TV. In this episode they reconstructed a Jupon, which had been worn by the Black Prince and is seen on his effigy at Canterbury Cathederal. Amazingly a jupon from that time survives and it was wonderful seeing such an old garment on the television.

A jupon is a padded garment worn over armour. This one is covered in the most exquisite hand embroidery and must have cost an absolute fortune to make. The garment is both opulent and practical, it was really fascinating to learn more about something I had no previous knowledge of.

Seeing the beautiful stitching close up, gave a whole new perspective to seeing it on the TV, it is so fine and delicately made.

My least favourite costume from the series was Dido Belle. I loved the episode, but the final garment left me a little underwhelmed. This one was particularly hard for the team to recreate as so little of the dress can be seen in the picture. I did however think it was important to discuss the life of Dido Belle and to have a black portrait subject as part of the series.

Although I wasn’t entirely sure on the accuracy of the garment, it was very beautiful to see. I loved the gorgeous fabric and the sash and shawl were lovely. I’d also love to read a lot more about Dido Belle and her story, so the series definitely opened up a line of interest for me.

I really enjoyed the episode about the hedge cutter. It was interesting to see a portrait of an ordinary working person and this made the garment all the more interesting. In the painting the jacket has extensive damage and patching. In the episode they created the outfit as it would have been new. I really liked this approach as it showed us the evolution of the garment.

I enjoyed seeing how they worked with leather and the different methods and techniques they used. The finished piece was just so beautiful and the details are amazing. As someone who loves vintage clothes, I can appreciate the passing down of garments and the extension of their lives beyond the first owner.

The outfit in the first episode of a Stitch in Time was a suit worn by Charles II. the original painting hangs at Ham House and it’s one I’ve looked at many many times. Despite this I don’t think I’d ever fully appreciated Charles’ outfit, so this episode gave me a whole new perspective on the painting.

In the episode they talked about the materials used and the time, effort and expense that went into creating a reasonably simple looking garment. I was most interested in the social importance and the message that Charles was conveying through dress.

At the end of the episode I thought Amber looked absolutely brilliant trying this on. I’m a little but jealous of her job to be honest!

The last outfit is one of the most beautiful despite it’s simplicity. It is based on a controversial painting of Marie Antoinette. In the painting she is seen wearing a simple muslin dress, this caused scandal at the time and was considered far to intimate for a queen. the painting was quickly replaced with a more traditional one, but it was the beginning of the downfall of her reputation.

This is an era I absolutely love, especially when it comes to fashion and royal history. Again this episode really looked at the social connotations of dress and it was so interesting.

On the programme they made a set of stays to wear under the dress, compared to relative simplicity or the dress the stays were far more complicated. As the episodes are only 30 minutes long there wasn’t that much time to look at the fin shed stays in much detail, so I was delighted to see these on display alongside the dress.

A Stitch in Time has inspired me to look a little closer at art, to consider the outfits and the reasons for the clothes that people wear. I’d highly recommend both watching the series and taking a look at the exhibition. Ham House itself is incredible and being able to see the clothes just adds to what an interesting location it is to visit. the series isn’t currently available on iPlayer, but may repeated on BB4 at some point. I did manage to find all the episodes on Youtube, so it might be worth looking there if you want to watch it.

Find out more about the exhibition on the National Trust website.

Find out more about A Stitch in Time  and view more clips on the BBC website.

A Visit to The Fan Museum

A Day Out at Hampton Court Palace

A Visit to No1 Royal Crescent