Seeing the Lost Dress of Elizabeth I at Hampton Court Palace 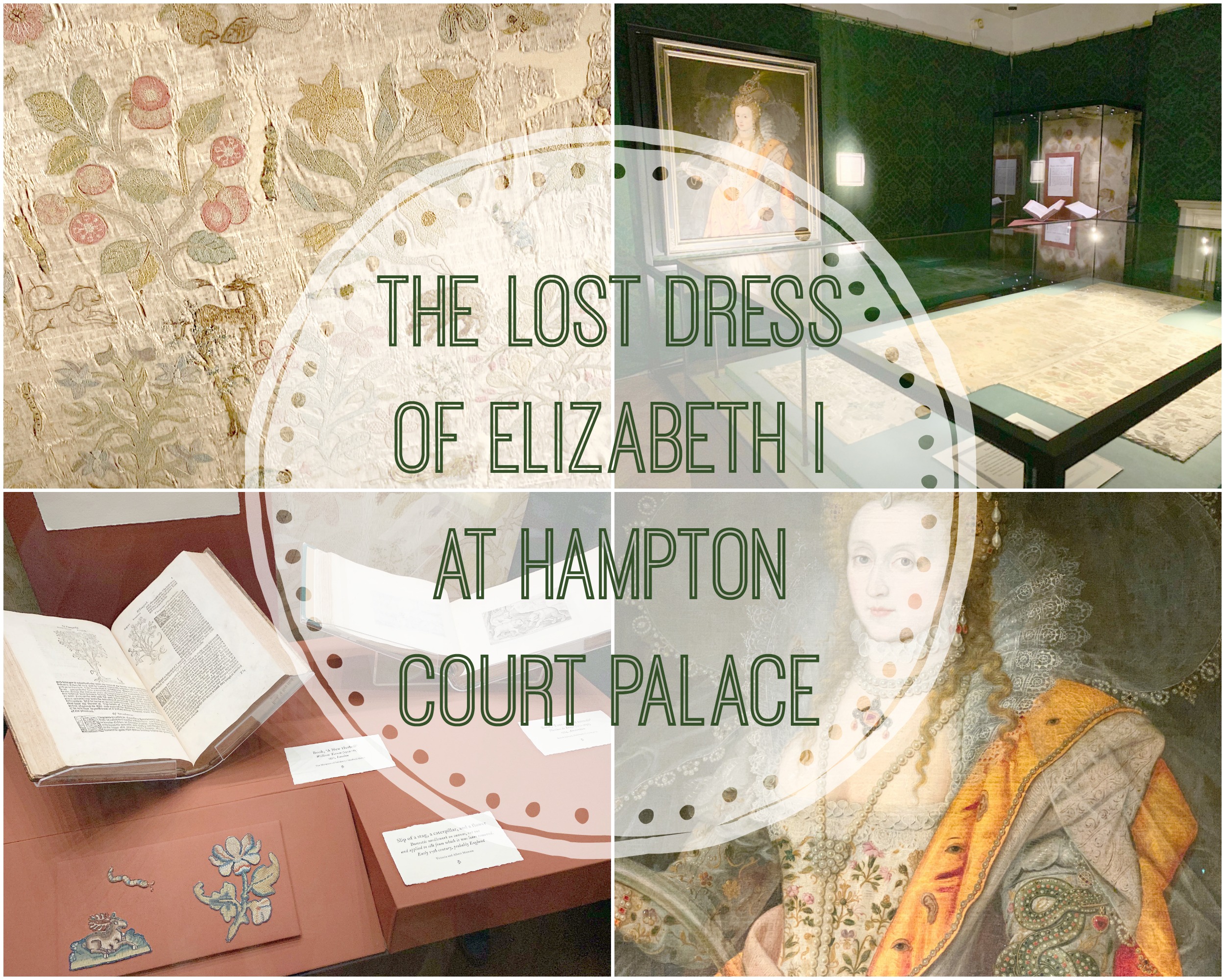 I absolutely adore learning about royal fashion. More than just clothes, they tell tales of politics, society and about the people themselves. We have many survivals from our recent monarchs, pieces that have been treasured and preserved. Many items of royal dress are kept safe in the stores of Historic Royal Palaces and are often brought out to be seen, researched and of course enjoyed. So it is extra special when a brand new discovery is made and this is exactly what happened in 2016 when HRP curator Eleri Lynn visited a small church in the village of Bacton and made an amazing discovery.

For centuries the Bacton Altar Cloth had pride of place in St Faith’s Church in Bacton, Herefordshire. The beautiful richly embroidered cloth first sat on the altar and later in a frame on the wall of the church. Members of the village and the congregation of the little church knew it was very special.  The fine details and beautiful fabric, were of exception quality and craftsmanship. However no one realised quite how special it really was. The cloth had long been associated with Blanche Parry, who was one of Queen Elizabeth’s most faithful servants. She was born and raised in Bacton, but spend most of her life at Elizabeth’s side. Elizabeth regularly gifted her old clothes to Blanche Parry, so there has always been speculation that the Bacton Altar Cloth was connected in some way to Elizabeth through Blanche.

The cloth continued to hang in the church for many years, despite local conservation efforts in the early 20th century, it’s condition had started to deteriorate and it was in danger of being lost forever. Blanche’s biographer Ruth E. Richardson championed the importance and rarity of the cloth and theorised the links with Elizabeth. When Eleri Lynn heard about the cloth, she knew she had to see it for herself. It was her who on examining the cloth, discovered evidence of pattern cutting, confirming that it had been an item of court dress and had once formed part of a skirt.

This discovery ensured the future safety of the cloth and it was moved to Hampton Court to begin the lengthy job of conserving it for future generations to enjoy. It took 3 years to fully research and conserve the cloth, ready to be displayed to the public.

In October I was invited to the Palace to see the cloth in all it’s glory and to learn all about it’s history from Eleri Lynn and Libby Thompson, who is a conservator who worked to painstakingly restore the piece. It was wonderful to hear their experiences from discovering the cloth, to learning about the history and techniques that make up it’s story.

The cloth is now beautifully displayed next to an amazing original portrait of Elizabeth. The iconic Rainbow Portrait is on loan to the palace from Hatfield House. In the portrait, Elizabeth is seen wearing a dress that bares a strong resemblance to the beautiful cloth. It’s amazing to see the two together and get a feel for how the cloth was once used and worn.

The display also features a fascinating background to the cloth. There are some books that feature designs and embroidery patterns that inspired the fine needlework on the cloth, as well as beautiful examples of embroidery in a similar style from the era. .

One of the most interesting things to me were two examples of embroidery that were created by The Royal School of needlework, using stitches that were discovered on the cloth. This really shows us just how fine the needlework was that adorned this fabulous garment.

I’d absolutely recommend paying Hampton Court a visit while the cloth is on display. I could spend hours looking at all the intricate embroidery and taking in all the little flowers and animals that have been immortalised in the stitches. It is such a rare survival that we are unlikely to ever see anything similar again. the cloth will be on display at the palace until 23rd February 2020.

Find out more about the Bacton Altar Cloth and the exhibition on the Historic Royal Palaces website.

Unveiling The New Exhibition Road Quarter at The V&A

FASHION – St Dunstan in the East