Fashion on the Ration at The Imperial War Museum 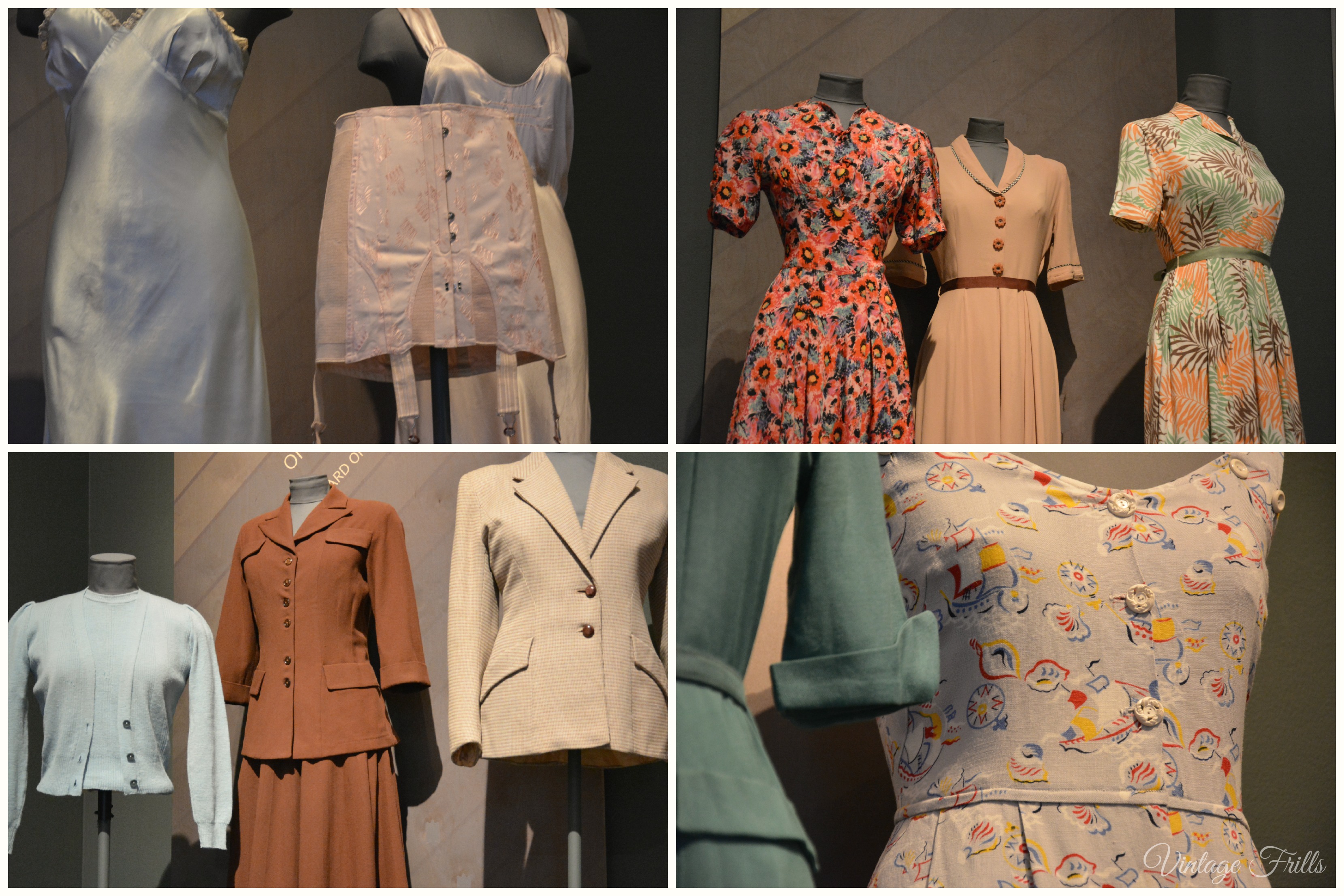 I’ve been excitedly anticipating the new exhibition on 1940s fashion which launched last week at The Imperial War Museum. Fashion on the Ration explores clothing worn during the Second World War and the social background that shaped the fashions of the era. I was really lucky to be invited to the press view and was one of the first people to have a look at all the amazing items on display. It was wonderful to meet the curator Laura Slater who showed us round the exhibition as well as Julie Summers who wrote the accompanying book which I reviewed on the blog last week.

The exhibition takes us on a journey through the war years, with a mixture of clothing, accessories, photographs and film as well as official documents, magazines, letters and ephemera. There are six sections each exploring different areas of war time fashion through the clothing itself and items relating to it.

First up is Into Uniform, during the war many types of uniform were worn both military and civilian, from Land Girls to WRNs theres are some beautiful examples of war time uniform on display.

Functional Fashion includes examples of how fashions needed to be practical during the war and how retailers needed to be creative in making items both functional and practical. Included in the display are house coats, siren suits and handbags designed to carry gas masks.

One of my favourite sections was the Rationing and Make Do and Mend area. To me these really define the day to day struggles people faced at home during the war. However it also celebrates the creativity and ingenuity women used to stay in fashion when very little in the way of new clothing was available to them. I was particularly excited to see a lingerie set made using RAF silk maps that I read about previously.

The fashion history enthusiast in me was most excited to see the fantastic Utility Clothing section. I’ve recently become really interested in CC41 clothing and was given my first pair of CC41 stockings for my last birthday. The introduction of Utility clothing is by far the most significant fashion innovation of the war and it is particularly interesting as top designers such us Hardy Amies and Norman Hartnell were drafted in to half design it. It was fantastic to see such pristine examples that really showed that Utility doesn’t have to mean boring. The clothing may have stuck to strict guidelines but style, print and quality were certainly not lacking.

Beauty as Duty looks at the lengths women went to to stay attractive despite shortages of many of the products that they had used before the war. Looking beautiful was seen as a duty during the war and lipsticks were designed to match uniforms. This section also houses some wonderful examples of propaganda scarves. I recently sold my 1940s Jacamar scarf and looking at these examples made me kick myself a little!

The final section is titled Peace and a New Look and looks at how the end of the war impacted fashion. The victory themed dresses on display are just incredible. It also goes on to give an example of a Dior ‘New Look’ ensemble from the designers influential 1947 collection, which went on to inspire the full skirted fashions of the 1950s.

The exhibition concludes with footage of fashion commentators discussing the legacy of the war upon fashion.

If you’re a lover of vintage fashion or social history then this exhibition is an absolute must-see. Not only are the items on display fascinating, but also inspiring.

Fashion on the Ration runs until 31st August 2015. Tickets can be bought online here or in person.

Find out more about Fashion on the Ration on the Imperial War Museum Website.

I’m giving away one copy of the Fashion on the Ration Book. To enter either comment on the blog post about why you’d like to read the book or tweet about the giveaway or both. I’ll be announcing the winner one the giveaway has ended and will contact the winner directly.

A Walk Along Bankside

The A-Z of Vintage – B is For Vintage Brooches